With the exception of cellular attacks that make use of SDR, rogue access point attacks are the most effective wireless attacks in practice today. Despite the fact that karma attacks have existed for nearly a decade, many devices still probe actively for their preferred networks, rendering them vulnerable to this form of exploitation [1]. Evil Twin attacks remain an issue for enterprise and smaller scale commercial networks alike.

Although effective solutions for detecting and responding to rogue access point attacks exist, they typically fall into a price bracket that is accessible only to enterprise customers [2][3][4]. This means that smaller scale commercial and retail networks, or even public sector networks operating with limited resources, are unlikely to be able to include rogue access point detection as part of their budgets. This lack of low-budget rogue AP protection has a severe impact on the security of the wireless landscape as a whole. Although attackers can and do use rogue access point attacks against enterprise networks, this is usually done with the intent of gaining credentials to pivot further into the target’s infrastructure. On the other hand, attackers who are focused on harvesting sensitive information such as credit card numbers are unlikely to target heavily secured and regularly audited enterprise networks. Instead, they are much more likely to employ evil twin attacks against softer targets such as local retailers and coffee shops, or make use of karma attacks in a crowded subway car or freeway. What this means is that the environments most likely to be targeted by a malicious actor are also the least protected.

In response to this problem, I developed an open source tool called sentrygun that can be run on inexpensive hardware in parallel with existing network setups. This blog post will cover the development of sentrygun, from the algorithms used to detect rogue APs to the design patterns used to leverage those algorithms by network administrators. Finally, it will document the successes and challenges faced when deploying sentrygun to protect one of the most hostile network environments in the world: BSides Las Vegas.

he first task in creating sentrygun was to develop a set of reliable, effective, and easily implemented algorithms for detecting evil twin and karma attacks. A lot of prior work has already been done in this area, which gave me a pretty big head start. Unfortunately, most of the more advanced methods of detecting rogue access point attacks require direct coordination with the wireless networking hardware [5]. Most networking hardware is highly proprietary, making this kind of cooperation next to impossible.

Detecting evil twin attacks using whitelisting is a classic approach outlined in multiple sources, most notably in a 2006 SANS publication by Larry Pesce [6]. In this strategy, a whitelist is created containing the ESSID and BSSID of every wireless access point on the network being protected. A packet sniffer then captures probe response packets from nearby access points. If a probe response is captured that has an ESSID from the whitelist, but a BSSID not in the whitelist, it follows that there is an evil twin attack occurring nearby.

This means that we can augment our previous approach by establishing a baseline TX range for packets sent from each BSSID in the whitelist. Any packets received that appear to come from an access point in the whitelist, but that have a TX value that falls outside of the baseline range for that access point, are deemed to have been sent by an evil twin. This combined approach of whitelisting and signal strength analysis provides a  more effective solution to evil twin detection. 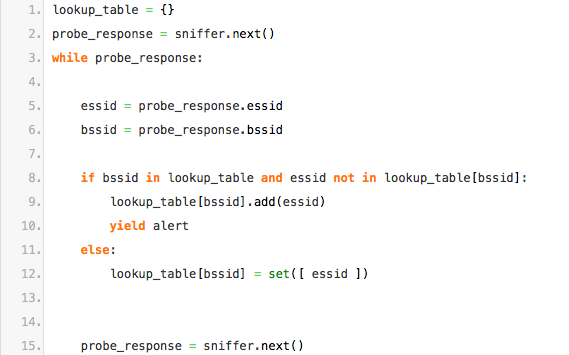 This means that karma attacks can always be identified by the one-to-many relationship that they create between a single BSSID that maps to multiple ESSIDs. Karma attacks can be detected by flagging any BSSID that sends probe responses for multiple ESSIDs. This algorithm can be further improved by periodically crafting and broadcasting probe requests for random ESSIDs using a parallel process. Doing so allows the algorithm to detect karma attacks even when no wireless clients are actively probing nearby.

Using the algorithms described in the previous section to build a functional wireless IDS system poses its own set of challenges. Such a system would have to be capable of protecting a wireless network of arbitrary size, and would have to scale with future expansions of the network. It would also have to give sole network operators a means of tracking and managing attacks across the entire network from a centralized location. The system would have to require minimal setup and fine tuning in order to work. Most importantly, the system would have to meet these requirements while still providing a reliable means of identifying, locating, and responding to wireless attacks. 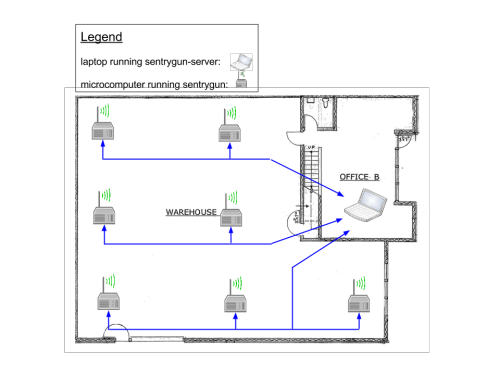 To meet these requirements, sentrygun was developed as an array of sensors arranged in a grid connected to a centralized command and control server through ssh tunnels (figure 1). All sensor and server systems are security hardened Linux installations. Each sensor runs a packet sniffing Python script that analyzes wireless traffic using the algorithms described in the previous section. When a sensor detects a rogue access point attack, an alert is pushed to the C&C server. The C&C server stores the alert details in a time based cache, then broadcasts the alert to one or more web clients. Each web client displays a list of all alerts that have recently been sent by the sensors.

As shown in figure 2, alerts can be expanded to show a list of all devices currently detecting the wireless attack. Network administrators can respond by launching a flooding or deauth attack that is carried out by all sensor devices simultaneously. Additionally, network administrators can attempt to locate the rogue access point by sending security personnel to the sensor detecting the highest TX power from the attack. Sensor devices are sorted by TX and can be labeled to facilitate this functionality, as shown in figure 2. Finally, network administrators can choose to dismiss the alert. Doing so causes the C&C server to remove the alert from the time based cache and broadcast a message to all web and sensor clients. This message causes all web clients to remove the alert from the list, and causes all sensors to terminate any existing deauth or flooding attacks against the rogue access point.

This architecture provides sentrygun with the means to detect, respond to, and locate rogue access point attacks in real-time. Additionally, since the most resource intensive work is done on the C&C server, the sensor units can be built using inexpensive platforms such as the Raspberry Pi. Finally, the web interface provides an intuitive cross platform interface for controlling sentrygun and analyzing wireless attack data.

Ensuring that sentrygun was able to function effectively outside of the lab environment could only be accomplished through intense field testing. Fortunately, the BSides Las Vegas NOC team generously provided me with a live environment in which to conduct such a test. Simply put: they put me in charge of wireless security for the conference. This meant that I was tasked with ensuring the integrity of attendees’ data during a week in which Vegas is home to some of the most notoriously hostile networks in the world. It seemed like an excellent opportunity to test  sentrygun.

I arrived in Las Vegas on Saturday afternoon, July 30th, three days before the start of the BSides conference. After meeting up with the rest of the BSides staff, we spent the evening unpacking boxes and making an emergency run to the local electronics depot to purchase supplies for the network. The NOC team was scheduled to build the conference network on Monday, which gave me all of Sunday to assemble and test each of the sensor units used in the sentrygun implementation. Due to the number of sensors needed to cover the conference floorspace, doing this in such a short timeframe seemed daunting. 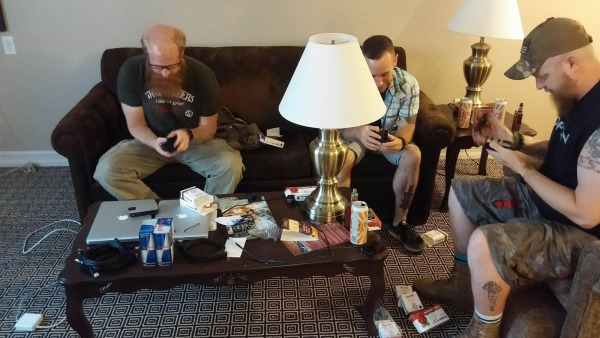 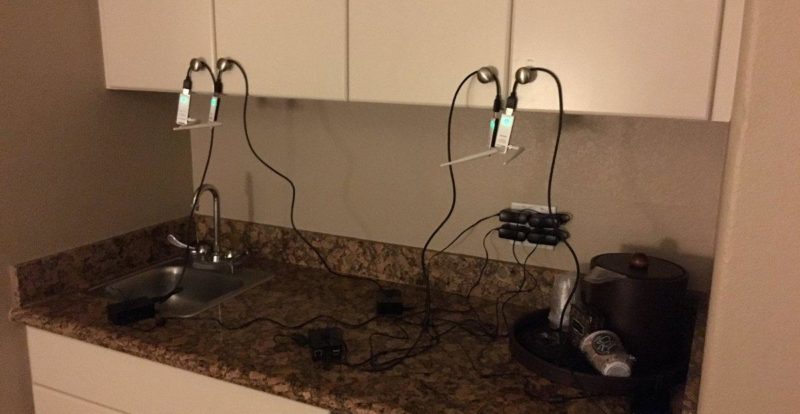 Fortunately, a few of the awesome folks on the BSides security team came to the rescue to help me set up the sensors. We converted a hotel room into an electronics workshop, sat down with a couple of cases of Red Bull, and finished building the sentrygun sensor units within a few hours. 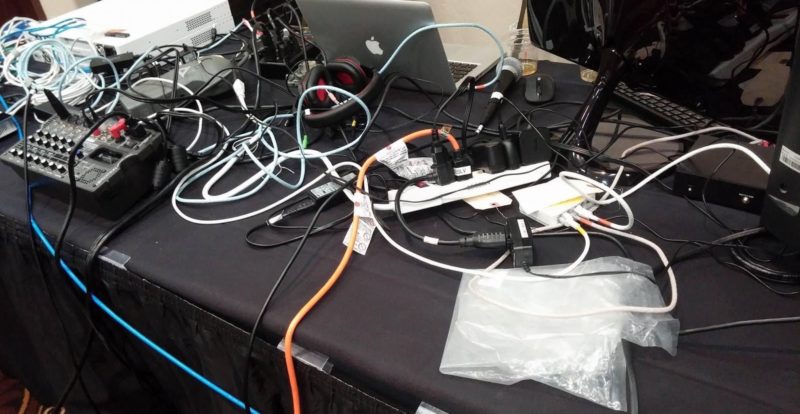 At the BSides NOC, we take cable management seriously

On Monday morning I joined the NOC team in setting up the BSides network itself. This involved running a few thousand feet of Cat5 cable, as well as configuring three wireless networks across multiple channels. Once the network was set up, the sentrygun sensors were laid out in a grid across the conference floor using copious amounts of gaff tape and Velcro. 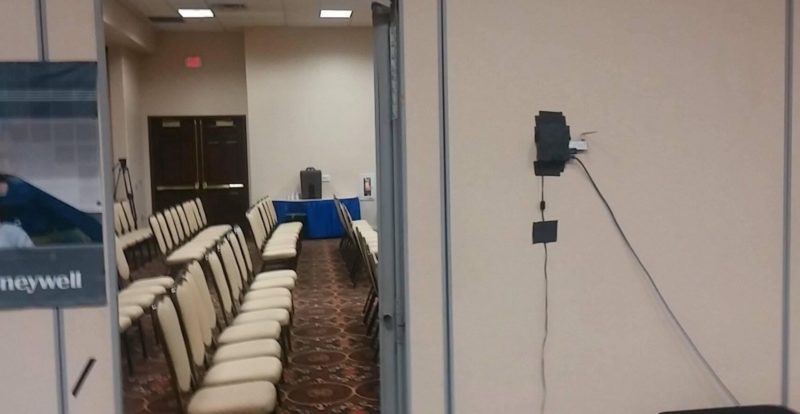 Don’t mind the things on the walls…. 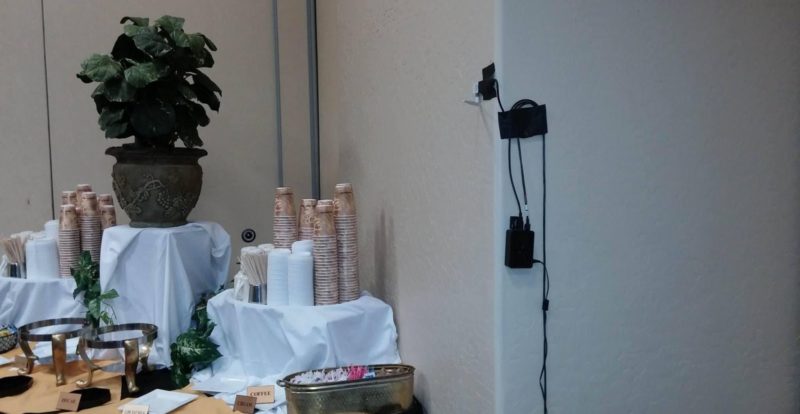 On Tuesday morning, the conference opened its doors and the network was put to use. Within half an hour, a panicked attendee had already summoned security after purportedly finding a rogue access point taped to the wall. The “rogue access point” turned out to be one of our sentrygun sensor units, much to the amusement of the BSides staff. We had no similar incidents throughout the rest of the day.

No wireless threats were detected until the early evening, at which point the 802.11 spectrum seemed to come alive with hostility. At around 5pm, sentrygun detected a karma attack emanating from one of the far corners of the main conference space. Security was dispatched to investigate, and after noticeably increasing the physical security presence in the area the attack stopped. By the end of the conference on Tuesday night, several similar attacks were identified and dealt with accordingly.

The field test demonstrated that sentrygun is capable of identifying wireless threats in a live network environment. It also led to several important findings that will prove critical in sentrygun’s transition from a proof of concept to a mature wireless defense platform. One such finding is that within the context of a crowded conference venue, narrowing the location of a rogue access point down to a few meters is not always enough. There were multiple incidents in which an evil twin or Karma attack was detected and localized to an area containing at least two dozen people with backpacks or laptops. In these circumstances, noticeably increasing security presence was usually enough to stop the attack. However, the ability to consistently identify the exact source or perpetrator of the attack would be preferable.

Overall, the sentrygun project has been a success. It has demonstrated that it is possible to provide rogue access point detection using relatively simple algorithms and inexpensive equipment. It has demonstrated that such a system can be designed and built over the course of a few weeks. It has also lead to the development or verification of three algorithms used for detecting evil twin and karma attacks. Most importantly, it has opened the doors for future research in rogue AP identification and mitigation.

There are aspects of sentrygun’s design that require further development. While sentrygun’s algorithm for detecting evil twins based on variance in TX values makes for an effective proof of concept, stronger statistical models that account for externalities such as environmental interference would be preferable. Similarly, it would be interesting to investigate the use of machine learning to distinguish between rogue and legitimate access points. Finally, a more effective technique for locating rogue access points is needed if the system is to be equally effective in highly populated environments.

Sentrygun is an open source project. If you’d like to contribute, particularly in the areas previously mentioned, please contact cyberlabs@aon.com or make a pull request to the appropriate Github repo from the list below:

Additionally, be sure to check out my DEFCON talk on rogue access point detection. The PowerPoint slides are can be found here, and video footage should be on YouTube within the next few weeks.