As we head into 2022, ransomware groups continue to plague our digital environment with new and interesting techniques to bypass Antivirus (AV) and Endpoint Detection and Response (EDR) solutions and ensuring the successful execution of their ransomware payloads.

In December 2021, Stroz Friedberg’s Incident Response Services team engaged in a Digital Forensics and Incident Response (DFIR) investigation and environment-wide recovery of a Cuba ransomware incident. We discovered novel indicators of compromise (IOCs) utilizing an interesting technique. Here, as part of the Cuba’s toolset, the threat actor group executed a script that abused a function in an Avast® Anti Rootkit kernel driver to terminate popular AV and EDR processes.

While the use of kernel drivers to target and kill AV and EDR solutions1 prior to encryption has been known and discussed for some time, the abuse of a signed and valid driver from an Antivirus vendor2  was surprisingly effective and ironic.

At the time of writing this article, there are three different versions of the same attack. They are listed below in the order of implementation complexity:

This article delves into the implementation of the third variant of the attack where the attacker uses a batch script as described in the third bullet point above.

The first stage of the hijack starts with the threat actor dropping three files, a batch script, a PowerShell script, and an Avast driver, within the target system’s “C:\Windows” and “C:\Windows\Temp” directories.

The threat actor executes the batch script to create and start a new service that utilizes a legitimate Avast Anti Rootkit kernel driver named aswArPot.sys. A short timeout is included to ensure the service is fully started, prior to the execution of the PowerShell script used to unpack and execute the controller.

The small (~5KB in size) PE loaded into memory proved to be simple, yet effective. The executable is designed to collate a list of actively running processes, then compare them to an obfuscated hardcoded list of CRC64 checksum values of AV and EDR processes names. If any process name directly correlates to an entry in the hardcoded list, an I/O Control (IOCTL) code is sent to the Avast driver, resulting in the termination of the process.

Disassembling the sample on Ghidra provides insight into the hashing and comparison functions of the controller:

1. The initial function creates a handle to reference the recently installed Avast driver via the CreateFileW API. If the driver handle returns as valid, the executable calls a function to find and terminate processes. 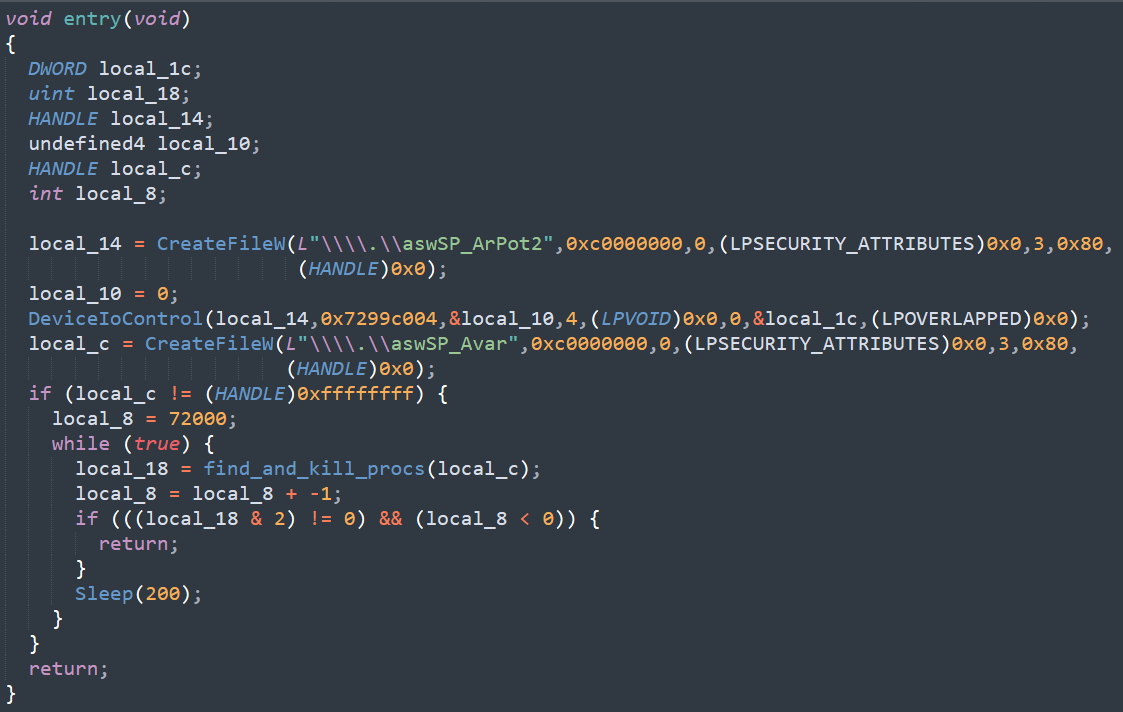 2. Once inside this function, a snapshot of actively running processes is taken. The function then iterates through the lowercase Unicode representation of processes names and calculates a CRC64 checksum on each of them using the CRC64_ECMA_182 algorithm. 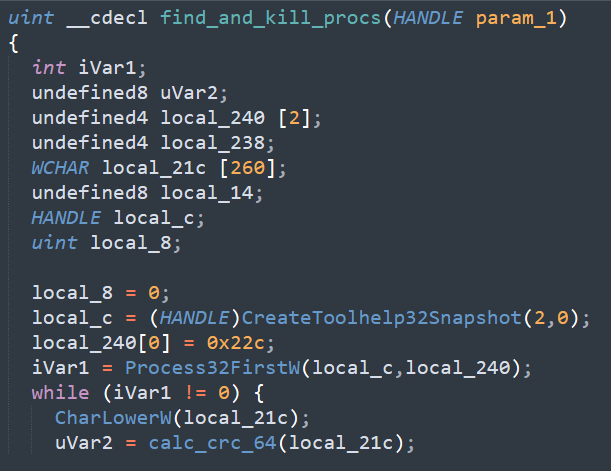 4. If the sample finds a match, it calls the Avast process termination function passing the handle of the Avast driver, and the matching process ID.

5. The DeviceIoControl API is called, which sends the 0x9988c094 IOCTL code to the Avast driver, along with the process ID. This results in the Avast driver terminating the process at Kernel level, bypassing tamper protection implemented in most AV and EDR products.

The aswArPot.sys Avast driver interprets the 0x9988c094 IOCTL code as a signal to terminate a given process. Below are the pieces of the Avast driver disassembled and decompiled for research purposes, which show the method to terminate a process from kernel mode, using KeAttachProcess and ZwTerminateProcess functions:

This IOCTL code and function can be found on multiple versions of the aswArPot.sys Avast driver, including the version distributed on Avast products as of December 2021. However, it was confirmed, through behavioral analysis, that the latest distributed versions of the Avast driver are not susceptible to this abuse. Upon contacting the Avast Bug Bounty team, we have received confirmation that the issue was known and had been resolved by Avast on a February 2021 update of the driver. Furthermore, we have received confirmation that Avast has been in contact with Microsoft to have them invalidate the signature of older versions of the driver. Avast has been informed by Microsoft that a security update on March 2022 would contain the signature update.

Different implementations of this driver’s abuse, found either on VirusTotal or on the engagements, contain different lists of targeted processes.

Utilizing the HashDB API service from OpenAnalysis3, we were able to recover the clear-text strings corresponding to the hardcoded CRC64 checksums of the latter sample mentioned above. The list contains process names from well-known AV and EDR vendors, which include, amongst others, processes names from SentinelOne®, Cylance®, Avast®, Carbon Black®, Sophos®, McAfee®, and Malwarebytes®.

Below is the list of 110 targeted processes found in the latest PE:

The PE found during the Cuba ransomware incident also contains a second smaller chunk of CRC64 checksums, which correspond to the names of three specific ransomware executables utilized by Cuba Ransomware: “a.exe”, “anet.exe” and “aus.exe”. These checksums sit next to unutilized strings “/c del“, “>> NUL” and “\\system32\\cmd.exe“. These strings are never referenced. Along with the recent iterations and enhancements on observed versions of this PE, these strings indicate that a potential future version of this executable could include a function to automatically delete the ransomware executables from disk.

The capabilities brought to the table by exploiting functionalities of a signed and widely distributed Antivirus piece of software, running under the highest privileges on a system, demonstrates the power of this technique. The sophistication and resources being applied by ransomware groups into new innovative ways to bypass security controls continues to increase.

This material has been prepared for informational purposes only and should not be relied on for any other purpose. You should consult with your own professional advisors or IT specialists before implementing any recommendation or following the guidance provided herein. Further, the information provided and the statements expressed are not intended to address the circumstances of any particular individual or entity. Although we endeavor to provide accurate and timely information and use sources that we consider reliable, there can be no guarantee that such information is accurate as of the date it is received or that it will continue to be accurate in the future.